Note: the toycoin series of posts is for learning / illustrative purposes only; no part of it should be considered secure or useful for real-world purposes.

With some underlying requiremnts covered in the previous posts, we get to blocks. Following the - Nakamoto paper, a block consists of a header and some transactions:

As transactions are broadcast to the blockchain network, full nodes will collect them, validate them, and with some consensus mechanism (proof of work here), append new blocks to the blockchain.

As more blocks are added to the blockchain, it becomes incresingly unlikely that a transaction from a bad actor involved double spending.

Building on teh transaction example from an earlier post, we have a information flow that looks roughly like this: 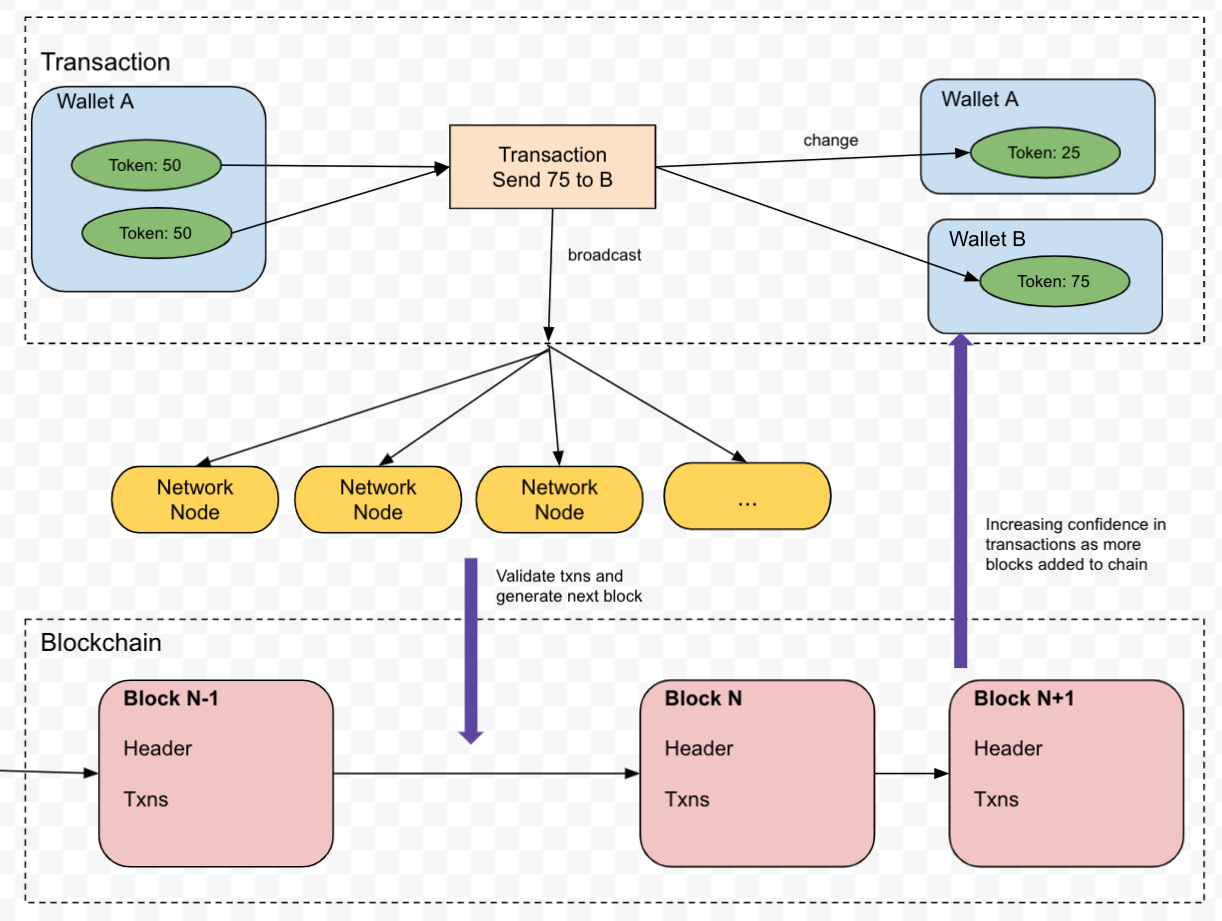 To generate a block, we supply the previous block hash, transactions, and the current proof-of-work difficulty. the function then returns a generated block (if possible) and any “remainder” transactions that weren’t processed. Some notes:

Though it seems that proof-of-stake has greater benefits and will be favored by many blockchains going forward, the consensus protocol for toycoin follows Nakamoto’s paper (Section 4 Proof-of-Work).

In short: perform some computation – in this case, find a hash with an increasing number of leading zero bits (or bytes). Honest nodes will work to extent valid blockchains, makingi t increasingly (exponentially) harder for attackers to double spend coins, unless they control the majority (51%) of computational power on the network.

The Nakamoto paper contemplates a self-adjusting level of difficulty for the proof-of-work, based on network throughput. The toycoin implementation is naive and far simpler:

If an incentive for producing the proof-of-work (“mining”) is to be included in toycoin, it could presumably be handled later by the node / network procol.

Though in most cases network nodes would probably want to minimize the need validate the entire blockchain (instead validating blocks incrementally), such a function looks like the following, where check for:

There is also a check that the first block has a magic genesis hash. Maybe that doesn’t add much.

Similar to transactions and wallets, the interesting tests for block involve mocking a scenario and generating a bunch of transactions and blocks, performing various validity checks at each step. It is tedious to read and long so is omitted here, but see the source.

At this point, the pure, side-effect free part of toycoin feels mostly done. There are probably still a few fundamentals missing, but they should be revealed upon trying to implement and test the node logic and networking protocols.

I do feel like I have a stronger understanding of blockchain basics… but on the other hand, the point of the blockchain is the decentralized, peer-to-peer network, so maybe I’ve not understood much at all yet.

I’ve only done some very basic network exercises, so the technical learning curve will probably be a bit steeper. Part of the original goal was also to visualize the blockchain activity, for which I’d like to use Elm. That means… using websockets or SSE to send network events to Elm via Javascript ports?